The owners of this home contacted YSS with structural issues concerning the foundation of their home. They received a level survey and report from Matt Krivonen of Krivonen Associates, Structural Engineers which indicated settlement along the West wall of their home. This section of the home was constructed on fill soils which had partially collapsed creating the foundation instability. YSS was contacted because being "highly recommended" by acquaintances of the home owners and the recommendation by the engineer. This project posed initial challenges due to the cantilevered main floor section which protruded nearly 2.5 feet from the main wall. This made excavation to the basement footing a work of precision. The foundation was excavated and exposed without causing any damage to the stucco exterior of the cantilevered main floor section. During excavation, the second major hurdle was discovered. For unknown reasons, an abandoned foundation (footing, stem wall, and grade beam footing) was discovered below grade and extended 2-3 feet from the actual end wall of the house. This not only made excavation more challenging, it also added complexity to the project. This abandoned foundation section was still connected to the house which increased loading and would act as an "anchor" while trying to raise the structure. YSS solved the problem by using a hydraulic concrete wall saw to cut the abandoned foundation free from the foundation supporting the home. The cuts were made diagonally so that not only would we isolate the active foundation but also to allow for upward movement during the lifting process. A total of 13 FSI Model 288 resistance piers were then installed to bedrock and the home was lifted and stabilized. Yellowstone Structural Systems performs foundation repair in the greater areas of Billings, MT, Missoula, MT, Cody, WY, and Powell, WY 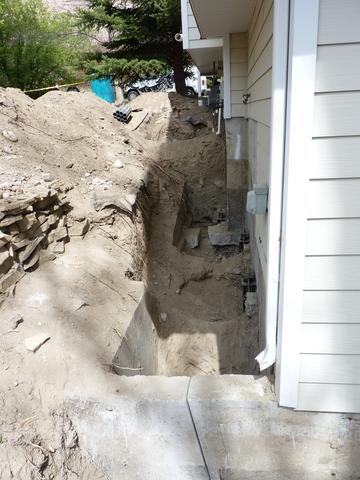 In this photo you can see the abandoned foundation as it extended from the active foundation of the home. You can see the angled relief cut made in the stem wall and the cut thru the center support footing. The FSI Model 288 resistance piers have been installed. 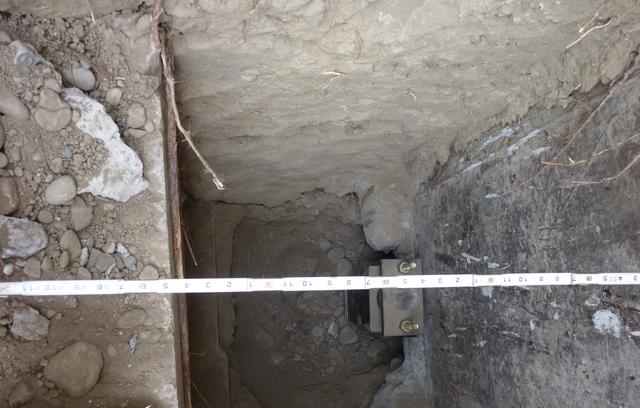 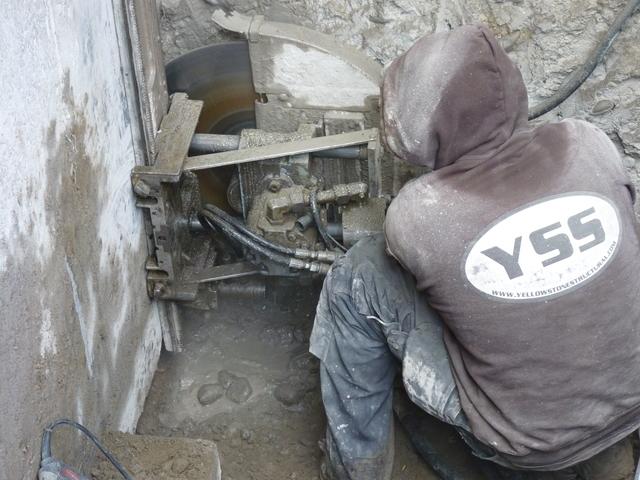 In order to separate the abandoned foundation from the active foundation, YSS used a specialized hydraulically powered concrete wall saw to cut through the 8" reinforced concrete wall from the top of the wall to the bottom of the footing. This saw was turning a 24" blade. 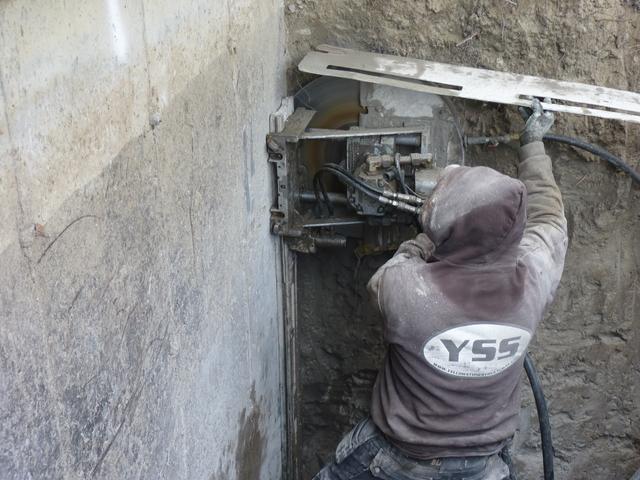 The 24" blade is able to cut to a depth of 9". Larger blades can be used for deeper depths of cut. The saw uses water to both cool the blade and make dust a non-issue. The cut was continued to the top of the abandoned wall and the active foundation was free to be lifted. 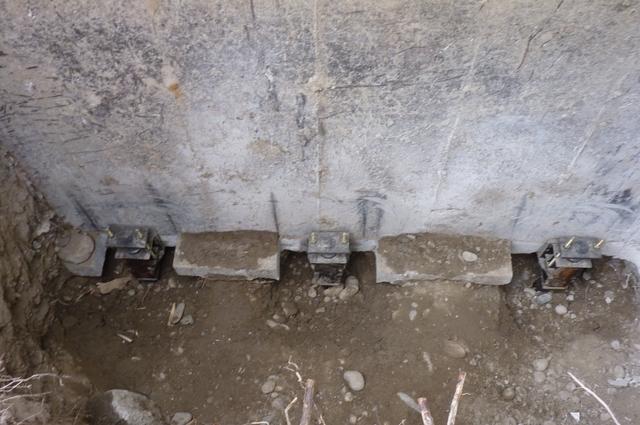 This photo indicates the attention to detail that Yellowstone Structural Systems puts into their projects. We do not use jackhammers to prepare the footings to accept the brackets. Using jackhammers causes unnecessary damage to the footing and removes more concrete than necessary. The footing locations in the photo were prepared using a flush-cut hydraulic concrete saw that created square and flush cuts. This allows the Model 288 bracket to attach perfectly to the foundation without creating point loads that can be caused by non-uniform surfaces. 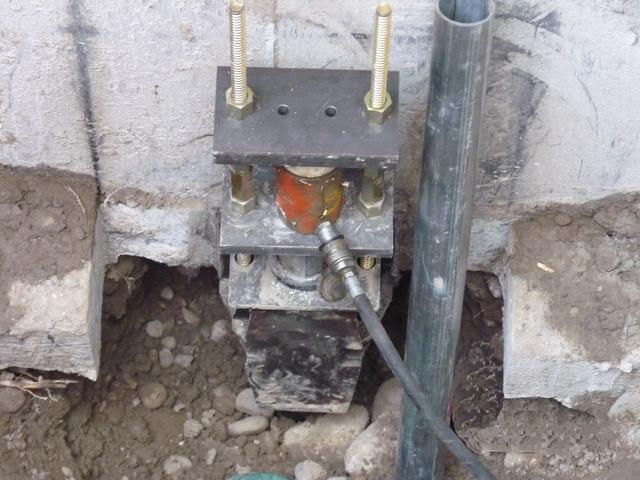 This photo shows an FSI model 288 resistance pier installed and equipped with a 20-ton lift cylinder and lift assembly. The hydraulic hose runs to a manifold and then to the hydraulic pump. This allows YSS to conduct the lift procedure uni-formally thereby reduces stress and strain on the foundation system as a whole. Along side the bracket is a Model 288 pier section. 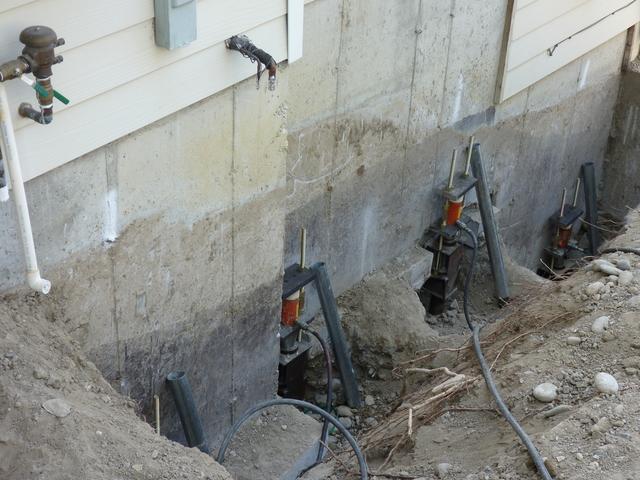 Four of the thirteen piers that have been installed and equipped with the components required to perform a uniform lift. 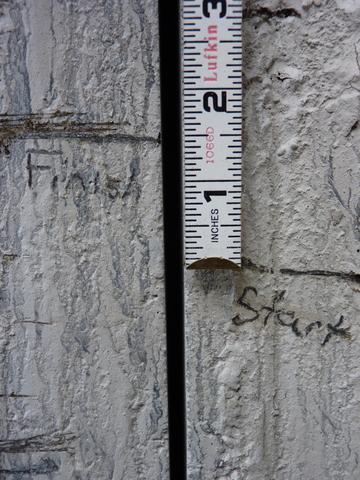 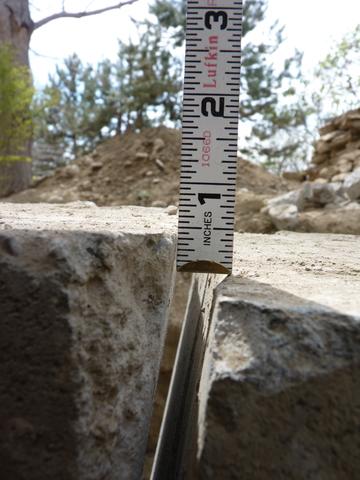 This photo was taken after the lift process was complete. This photo illustrates the shear movement at the top of the walls between the active foundation and the abandoned foundation. The cut seen in the photo was made to separate and free the active foundation to move. This section of the home was only required to be lifted 0.5", the importance was to permanently stabilize this area. This photo indicates 0.5" of shear movement between the stationary wall and the active wall.

This photo illustrates the angled relief cut that was made to relieve the load off the active foundation and was taken after the foundation was lifted. You can see evidence of the movement in two instances. The top of the wall was once flush and continuous, the section attached to the active foundation is now 0.5" higher. Additionally, there is greater separation between the two wall sections at the saw cut line. 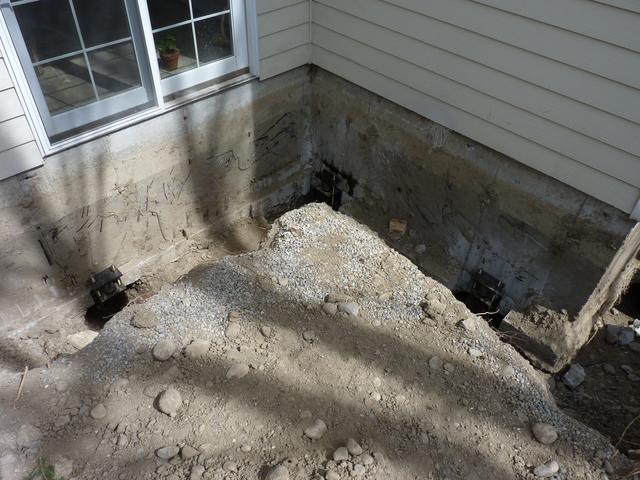 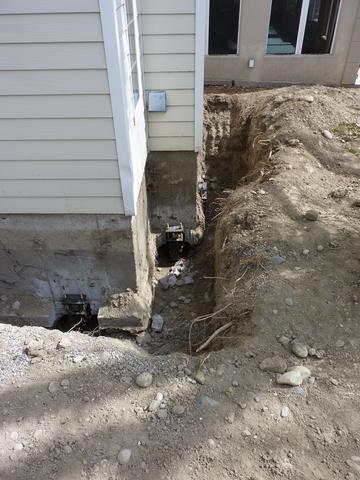 This photo shows the last three of the fourteen piers that were installed beneath the foundation and chimney along the South portion of the home. This area had piers installed to stabilize the structure and prevent future settlement as a result of the collapsing soil. Yellowstone Structural Systems proudly serves the greater areas of Billings, MT, Missoula, MT, Cody, WY, and Powell, WY

Back to Previous Page

We serve the following areas